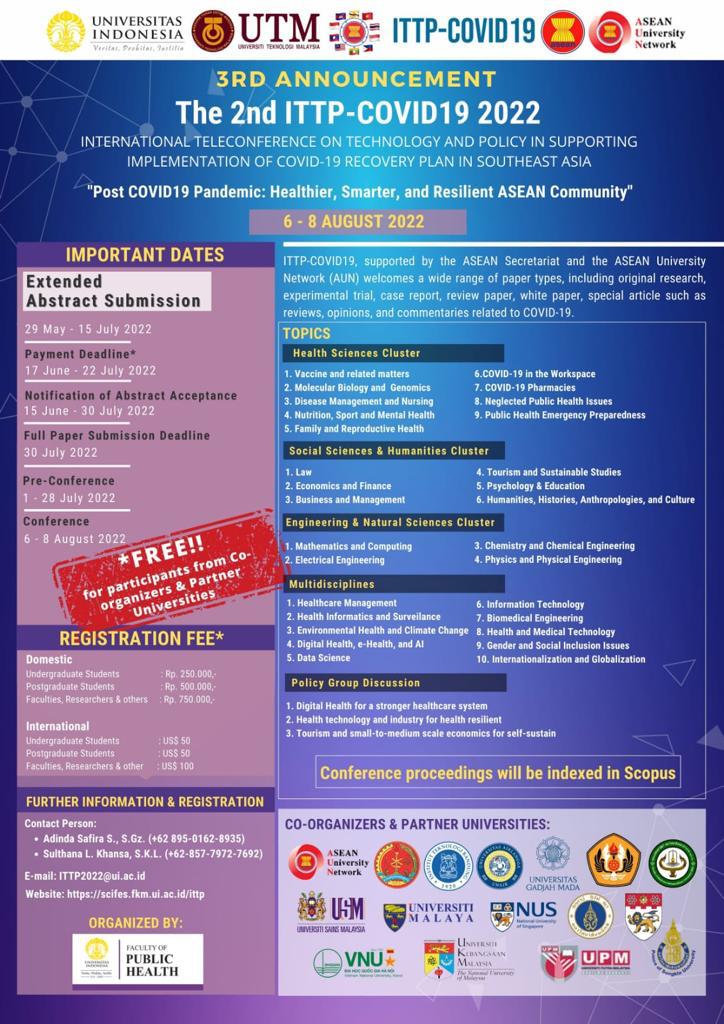 The 2nd ITTP-COVID19 will be held online on 6-8 August 2022 with the conference’s theme “Post COVID19 Pandemic: Healthier, Smarter, and Resilient ASEAN Community”. One of the main sessions in this conference is Paper Presentation in which ideas are encouraged to be shared. 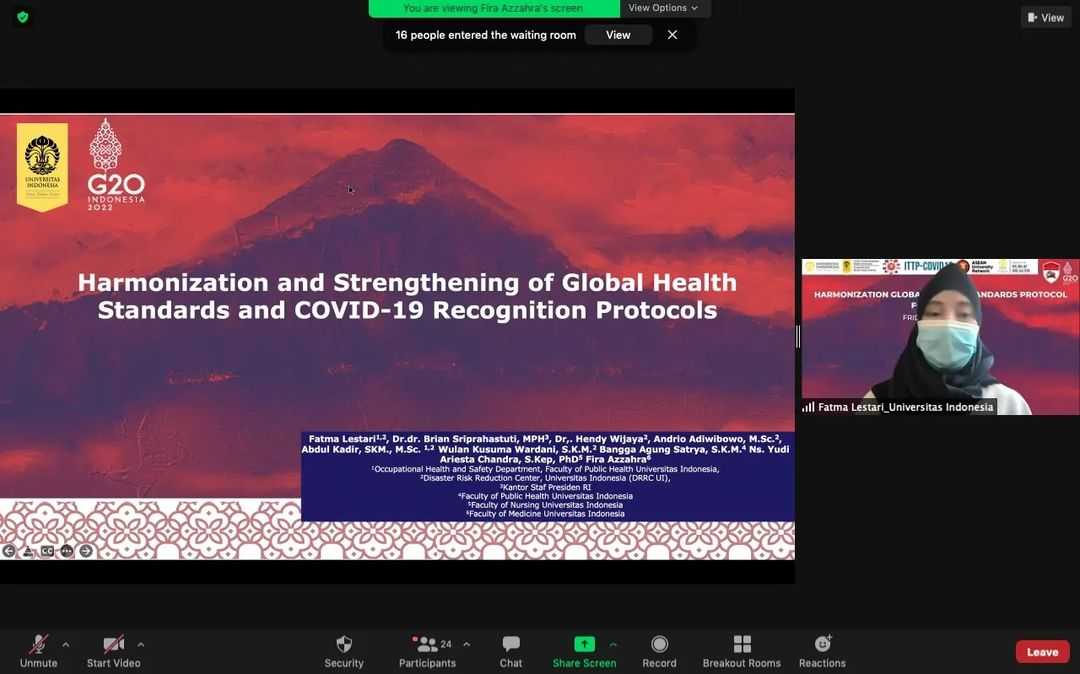 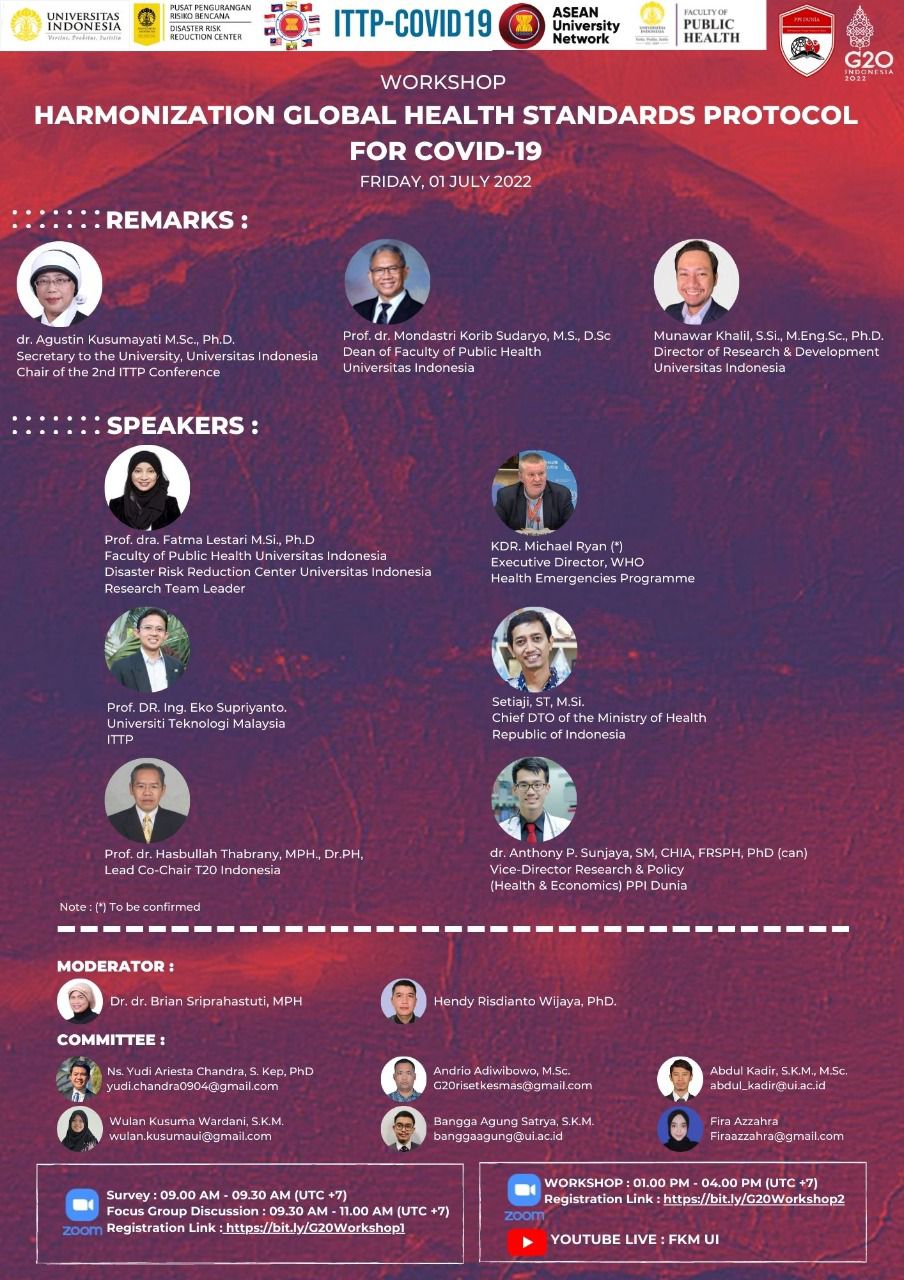 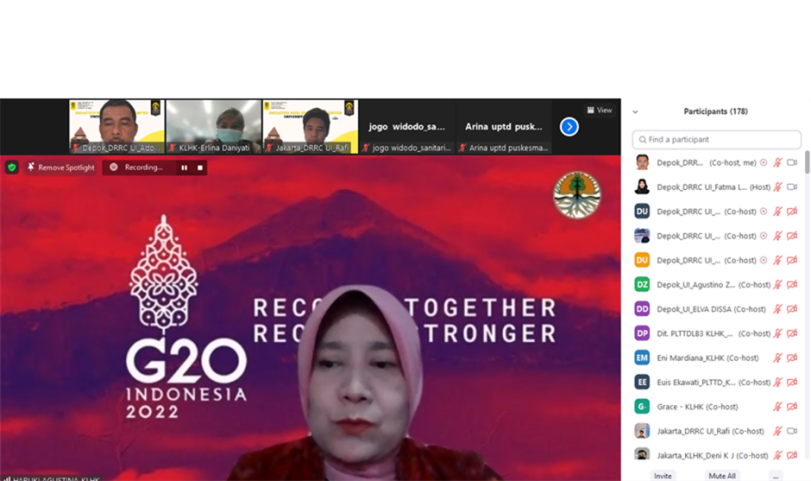 The Group of Twenty (G20) is a multilateral economic forum consisting of 19 countries from the world’s major economies, and the European Union. At the Pittsburgh Summit 2009, G20 Leaders officially designated the G20 as “the premier forum for international economic cooperation”. The G20 accounts for more than 85% of the world’s gross domestic product, 80% of global investment, 75% of global trade flows, and two-thirds of the world’s population. For the first time, in 2022, Indonesia has the privilege to be the Presidency of G20. Indonesia’s G20 Presidency is in a crucial period as global economic recovery remains uneven, exacerbated by unequal distribution of vaccine, disruption on global supply chain, and sheered attainment of Sustainable Development Goals. On top of those, geopolitical tension seems to cloud the recovery efforts. Guided by the spirit of “Recover Together, Recover Stronger”, Indonesia aspires to lead the international community in navigating through the current challenges. Indonesia’s G20 Presidency is of the view that recovery can be sustained and supported with a global cooperation and policy coordination in three important areas, namely: global health architecture, economic transformation based on digitalization, and energy transitions. 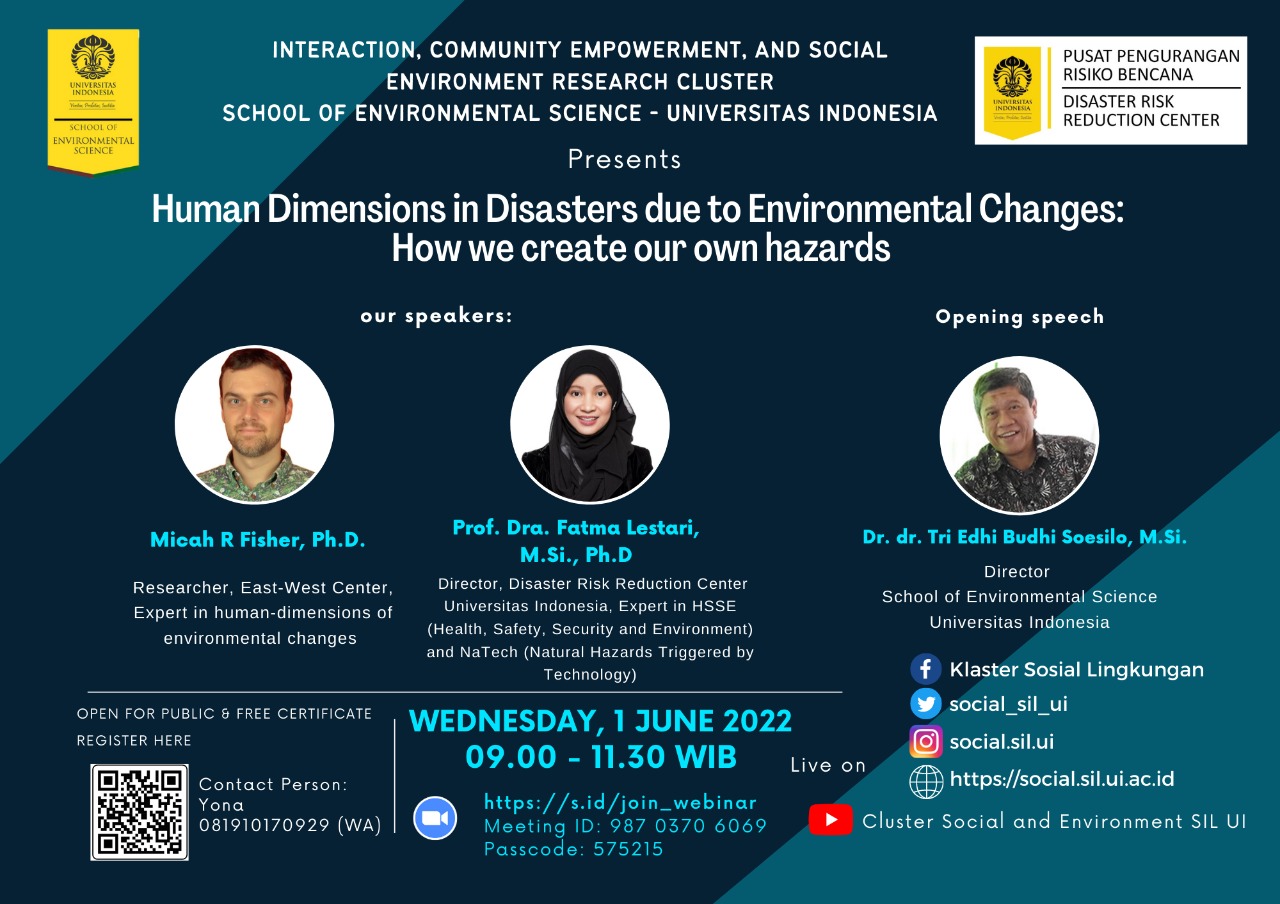 Human Dimensions in Disasters due to Environmental Changes: How we create our own hazards
Indonesia, 1st June 2022

DRRC UI Director, Prof. Dra. Fatma Lestari, M.Si., Ph.D., was invited to become a speaker at a webinar held by School of Environmental Science Universitas Indonesia. She, alongside Micah Fisher, Ph.D. (A partner of DRRC UI as well), talked about various case studies, empirical knowledge and status quo regarding environmental disaster that happened and how it can be traced back to human-related aspects. 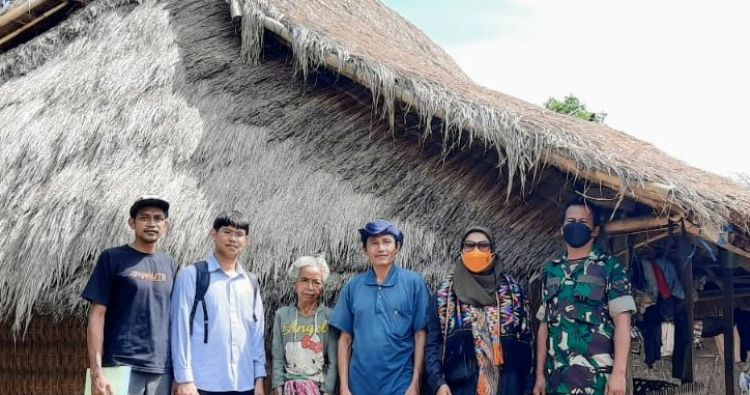 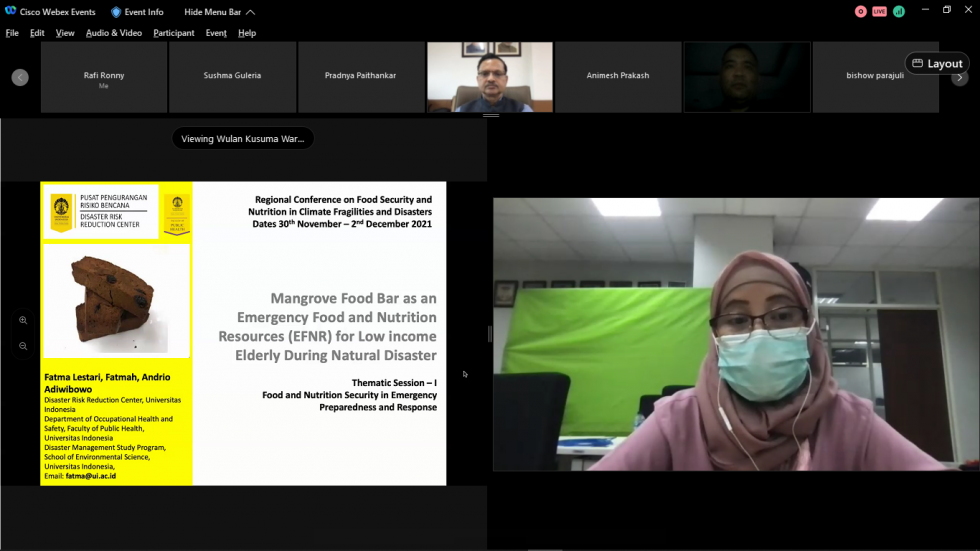 DRRC UI attended a regional conference held by the National Institute of Disaster Management India (NIDM) with WFP (World Food Programme). DRRC UI’s team and case story was selected by the jury panel as one of the most inspiring stories in the “31 most inspiring stories” in the conference. The case story was presented during the regional conference and will be included as a published book. 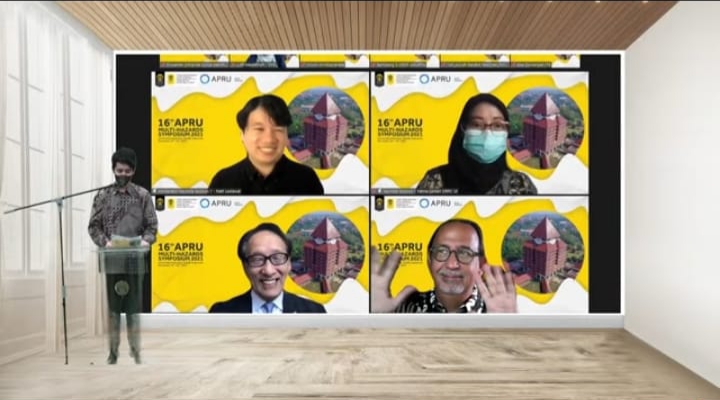 On 24 And 25 November 2021, Disaster Risk Reduction Center Universitas Indonesia (Drrc Ui), International Office Universitas Indonesia (Io-Ui) Collaborated With The Association Of Pacific Rim Universities (Apru) To Organize “The 16th Apru Multi Hazards Symposium 2021”. This Symposium Is A Disaster-Themed Symposium Held As A Platform For Academics, Experts, Professionals, And The General Public To Exchange Ideas, Propose Ideas, And Discuss Various Issues In The Field Of Disaster. This Year, With The Theme “Building Partnerships For Sustainable Disaster Risk Reduction (Drr) For All Hazards”, The Symposium Was Attended By 1044 Participants From Various National And International Groups. 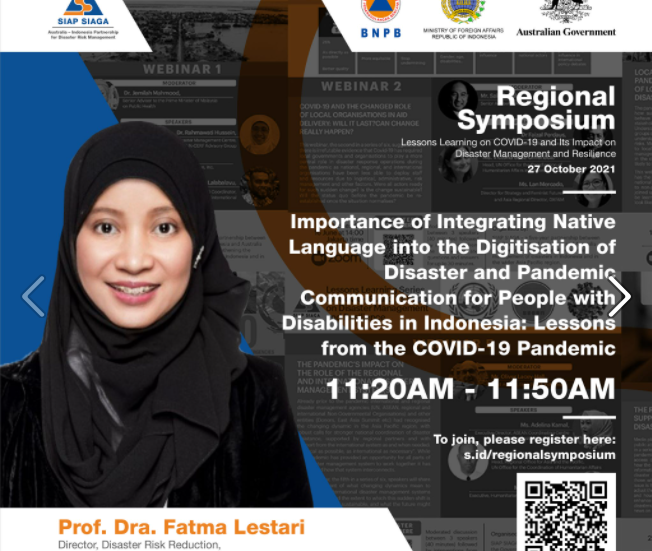 Disaster Risk Reduction Center Universitas Indonesia attended and gave a presentation titled “Importance of Integrating Native Language into the Digitisation of Disaster and Pandemic Communication for People with Disabilities in Indonesia: Lessons from the COVID-19 Pandemic” in the Regional Symposium “Lessons Learning on COVID-19 and its impact on Disaster Management and Resillience” held in collaboration between Indonesian National Board of Disaster Management (BNPB), Indonesian Ministry of Foreign Affairs (Kemlu RI) and the Australian Government.

WE ARE ON THE NEWS 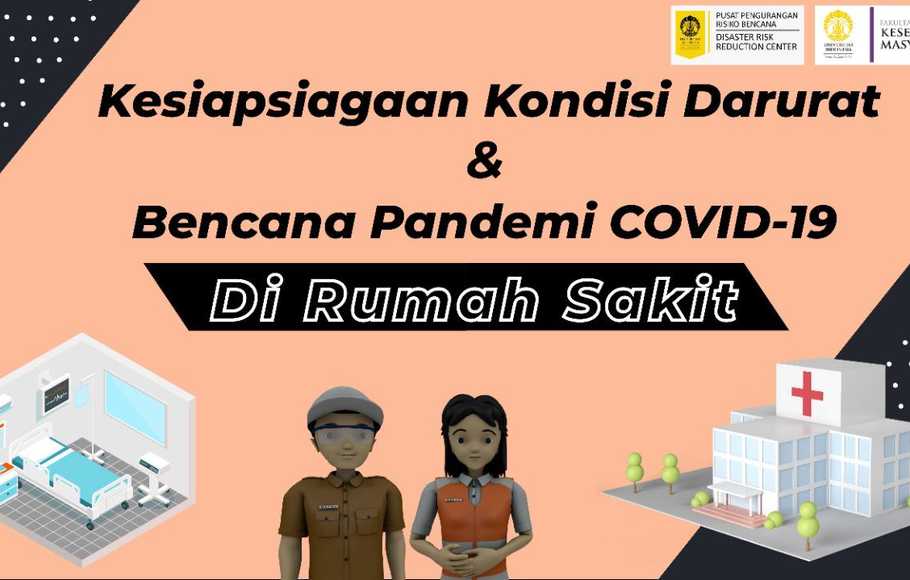 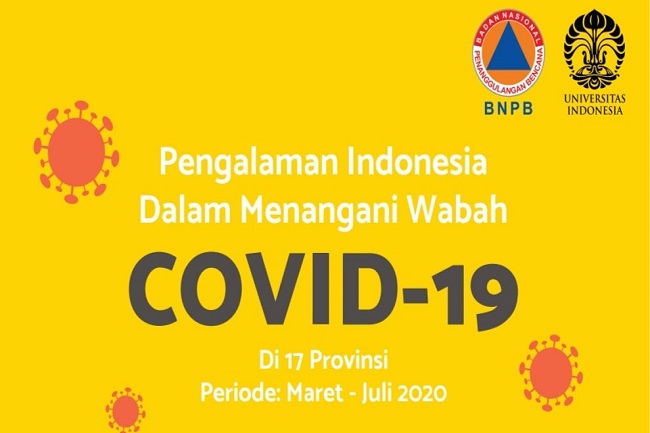